I am going to work at catching up the blog.  I really want to save these memories.  I still can't believe how blessed we are.  I am full of gratitude for her and for everyone who helped to bring her home.  This post is mainly just pictures.  Future ones will have more text. 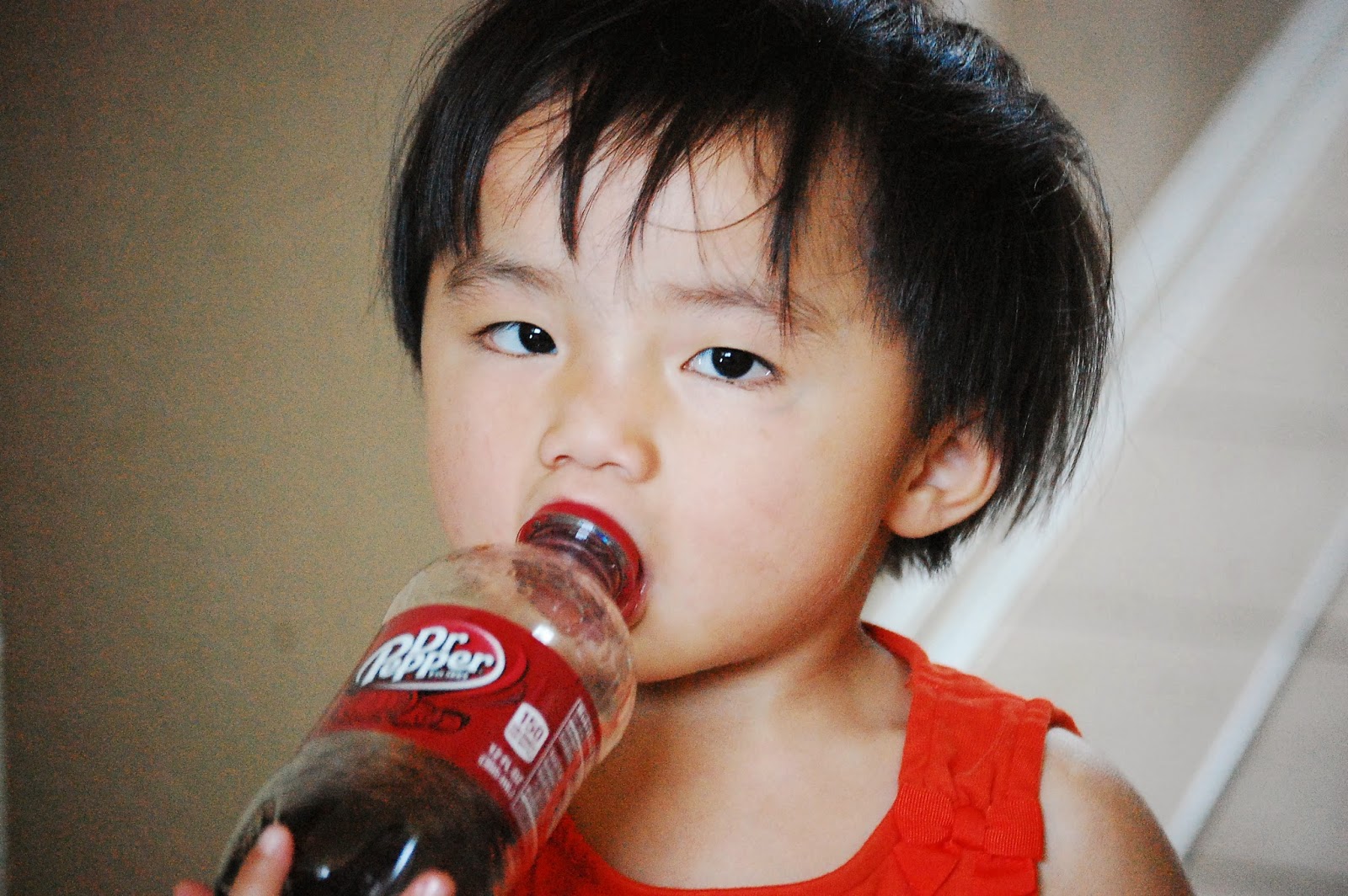 Starting bad habits - but isn't she cute.  My own Dr. Pepper habit has been greatly reduced, so her access to the yummy goodness is restricted. 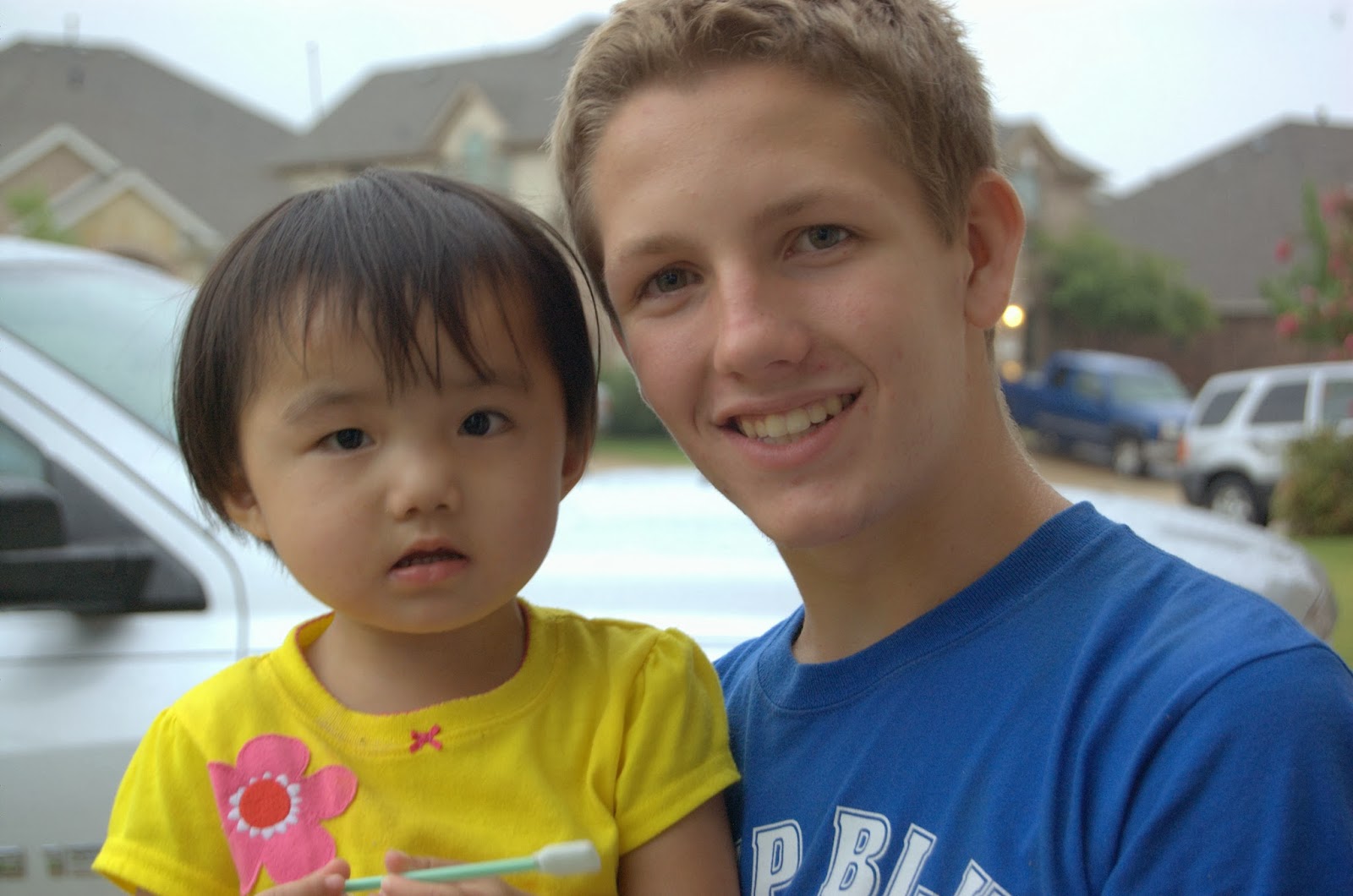 She still adores her brothers.  I love watching them all together.  They dote on her. 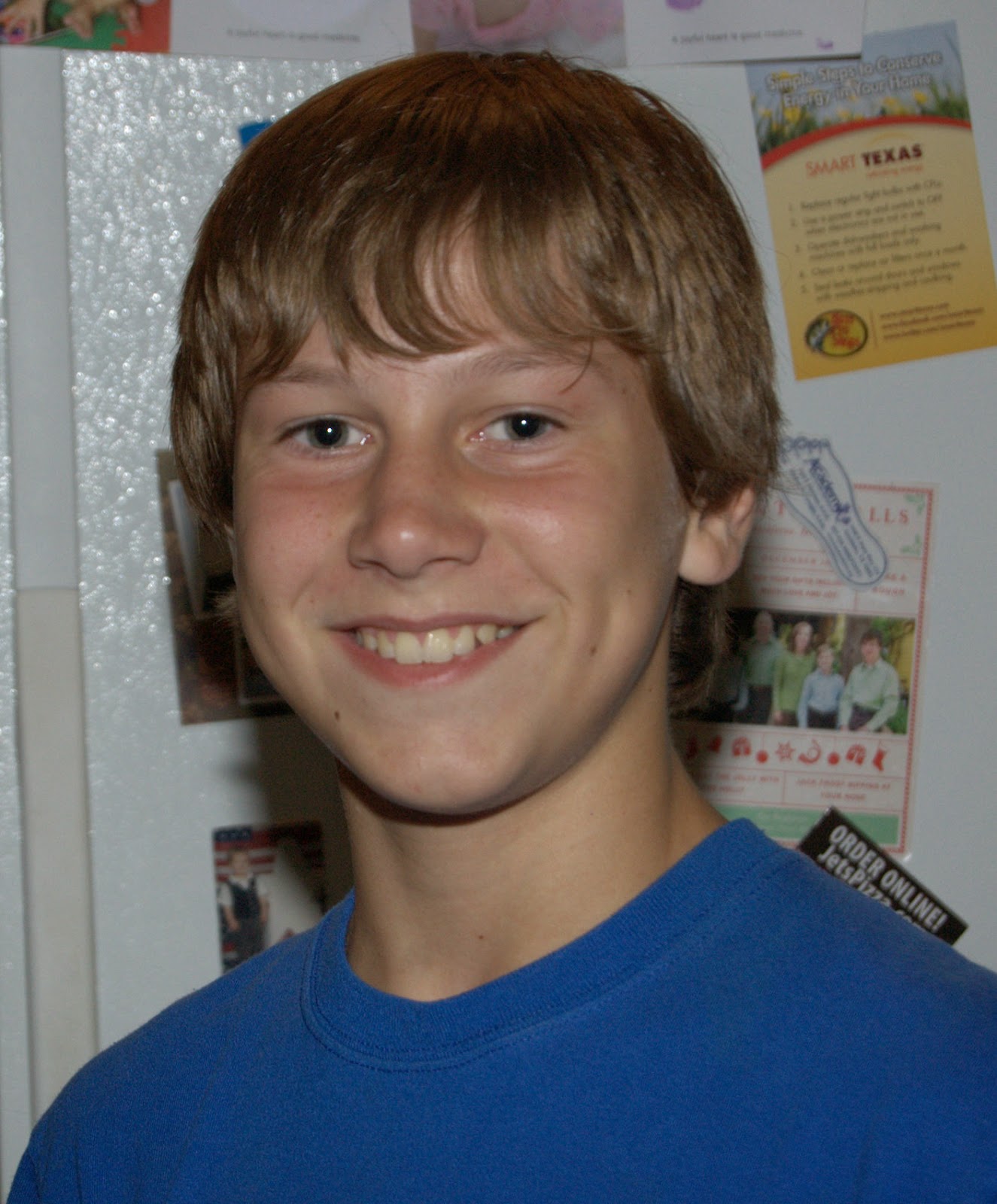 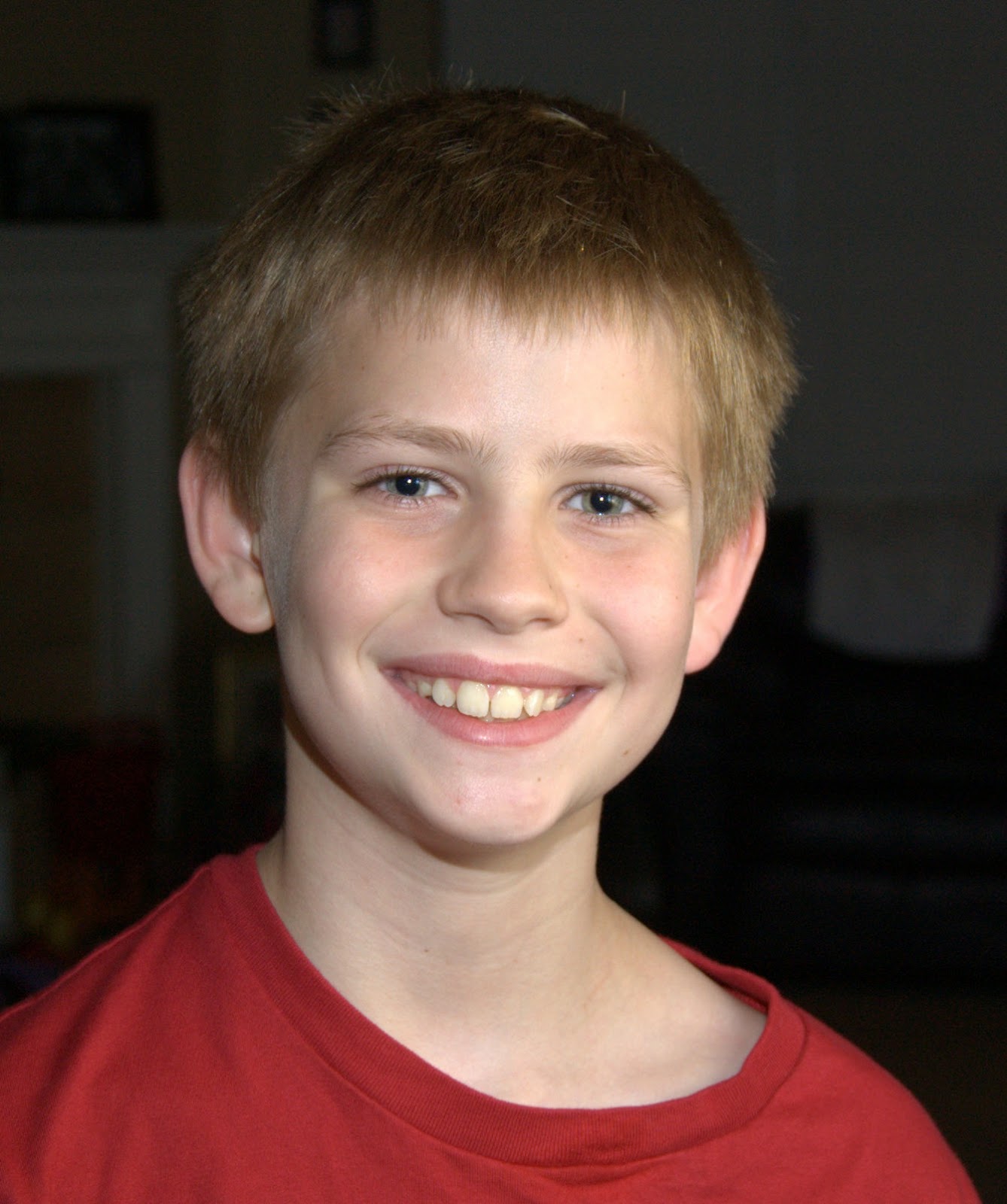 My precious Cade.  He loves Emma, and the love is returned.  I am so glad that he has her in his life.  She brings him so much joy.  He is struggling so much lately with social issues.  I wish I could fix things for him.  He is so sweet, loving, compassionate, smart, and talented.  I pray all the time that God will send him the friend that he needs. 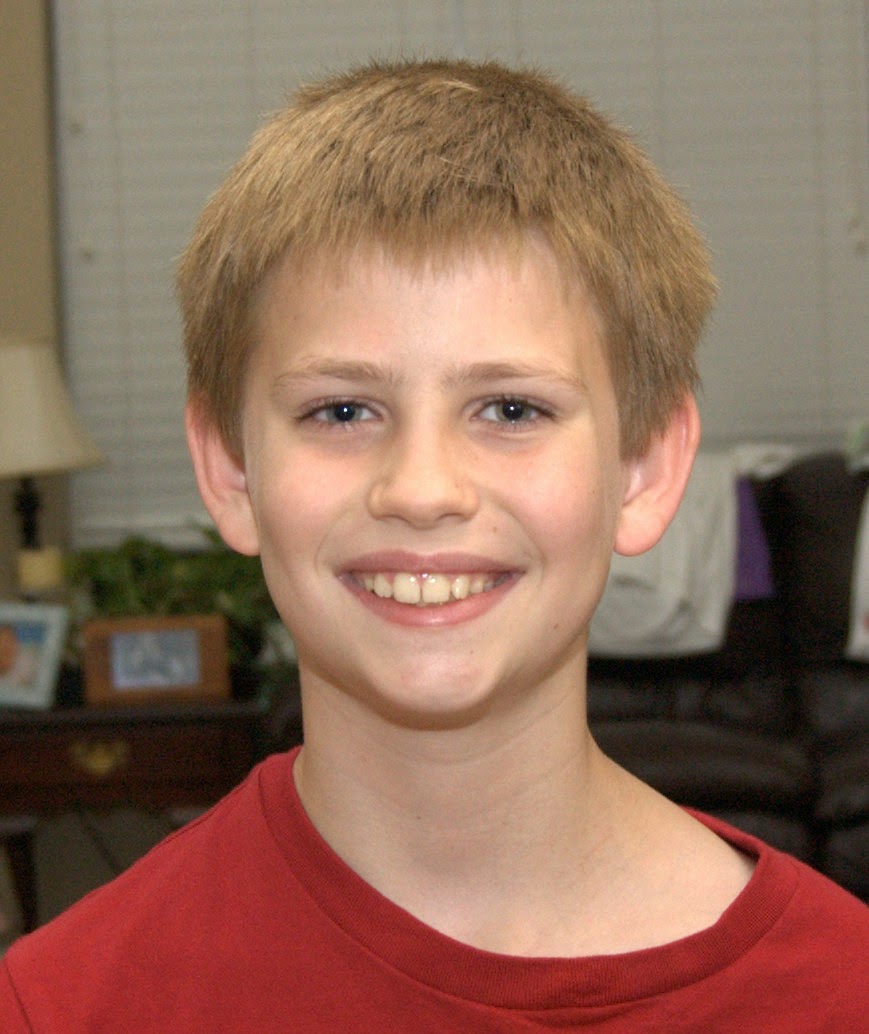 Mark was playing with his flash, but I wanted to preserve both of these pictures, so here is a double dose of Cade.
Posted by Jenna at 1:36 PM No comments:

Yes, this is how these two roll. Cade is in a ninja outfit. When he wears this, Mark calls him "Fist of Goodness".

Chase made her a caramel frap. She loved it. Starting good habits early.

She loves sunglasses, but she also quickly destroys them. This is an old pair of mine. They were lost at a store not long after this picture, but she had already bent the frame. I have tried to find her some kid sunglasses, but I really can't find any that fit her. Her noggin is big, and she doesn't have much of a bridge on her nose. Plus, she would destroy them :-)

She was able to meet my sister and loved her right away. Not the best picture, but she really did like Jenise.

Emma, Cade, Nate, and I ate at Cheesecake Factory with my sister. The boys had never been there before and were more than a little excited.

At the car wash. She really loves Dylan.

She really does like to help. She helps me with the laundry and with cooking. Here she is helping Mark do the dishes.

This last week was VBS week. Chase and Dylan were helping out. Dylan is Grape Guy.

I think she fits right into our crazy family.

She has some serious love for her brothers.

Pressing her face into his.

Sometimes there are no words

This picture cracks me up. Also, look at the bow!!

Future CBH camper. Jenise got her this shirt.

She really loves her Aunt Charlotte.

I have some swimming pictures that are still on the camera. She LOVES swimming and is fearless. Those will be in the next post.

Day at the Zoo

Emma was able to meet another one of her aunts and some more cousins. My boys wanted to go to the zoo, so we met up there. That may not have been the best first meeting spot because it took Emma a while to warm up to them. In the end, it was impossible to resist the sweet mothering of her cousins. I know that they are going to have a great relationship. She did enjoy the zoo, and we were able to see the new baby elephant. Chase wasn't able to join us because he was working.

Emma loves Dylan so much. I forgot the good camera, so phone pictures will have to do.

Emma really likes birds, so I was looking forward to having her feed the birds.

There have to be some stagecoach pictures.

I guess Dylan, Cade, and Ben were too big to participate in these pictures :-)

Tornado stimulating tube. I didn't let Emma in because I thought it might freak her out. After their turn, she hopped in and wanted a turn. I was out of money so she was out of luck. There doesn't seem to be much that scares her. We have found that lightning does scare her a little.

Sorry that I have been so bad about blogging. Life is getting in the way. Emma continues to do so very well. Things with her get better and better every day. I do not know how I got to be so blessed. This post is going to be a bit random and disjointed, but I want to get some things down before I forget them. I may even repeat myself because I don't remember what I have already blogged :-)

The pets: Emma LOVES our pets. Our dog, Maggie, tolerates Emma well. I never worry about her nipping at Emma even if Emma pulls her hair or tail or beats on her (all things that have happened). We do have to be cautious with her around other dogs. Emma can often be heard telling Maggie to "come ere". Maggie only obeys if Mark or I also call her. Maggie tries to avoid her as much as possible except at meal times. Not only does Maggie get the food that Emma happens to drop, she also gets the food that Emma gives to her. Maggie may gain 10 pounds. Maggie also gets very jealous when Mark plays with Emma. Maggie will bring Mark her ball and will keep dropping right by Mark. Our fluffy kitty, Izzy, is also really good with Emma and will tolerate the loving. Emma loves the kitties and says "meow" when she sees them. I actually think that the Chinese word for cat sounds like "meow". Our short-haired cat plays the disappearing game around Emma, but she is like that with most people. There's a reason we changed her name to Cra-Cra. Emma was able to meet Charlotte's kitten, and it was love at first sight.

Random thought: it was mentioned to me several times while in China that I needed to be careful about letting Emma get to dark. That is such a foreign concept to me since I've spent my life worried that I am too white. I am not going to worry about her getting too dark (she will be sunscreened just like her brothers). I will also admit publicly that I am so very jealous of her beautiful coloring.

Church: She is doing great at church. I initially brought her for just a little bit on a Wednesday night. We then took her to Sunday morning. She didn't make it through the entire service, but she did very well. She is very social and easy-going, so she did well being around people for the most part. Towards the end of church I took her into the youth room. That did overwhelm her a bit, and she became clingy after that. The next week, I had to stay home with a puker, so Mark took her to church. Apparently she was quite the social butterfly. I am so thankful that she is adjusting so well and is comfortable around others.

I stayed in with her for Bible class. This is actually the class that is a little bit older than her, but her aunt Charlotte was teaching and it is the class she will be in starting in August. She did really well for most of the class.

Mark sent me this picture from when he took her to church. Notice the chocolate donut mouth. She was saying "ah" because she had just taken a drink of Mark's coffee (I know). Notice also that she has a bow in her hair!!!!! This was the first day that she actually left it in. She is willing to wear a bow a lot more often now. That does make me happy.

Now for some random pictures.

Spaghetti was a huge hit.

We always hold hands and say a prayer at dinner. At first, Emma would look at us like we were nuts and just keep on eating. We finally got her to join in. Now she thinks it is great fun, and we often have to say multiple prayers during dinner :-)

I just love her so much

Sleep: The sitting in the chair by her bed isn't working so well. She does everything in her power to get your attention, and she is so stinkin' cute and funny. Most of the time I end up lying down with her until she goes to sleep. Honestly, I'm not too concerned about it. It is such a sweet, snuggly time. When she gets older, I know that this is the time that she will want to talk. She does like for me to sing to her, even though I am an average singer. She has started trying to hum the songs. I need to improve my selection. I don't remember a lot of songs that would be good to sing to her. After she is asleep, I leave her room. Most nights she stays asleep until 6 or 7. I lie down with her again, and we both go back to sleep. When she wakes up for good, then she wants a piggyback ride to breakfast.

Swimming: The girl loves the pool and is fearless. She will now run off the diving board into the water. She is comfortable in the water and is already making swimming motions. We have to be super vigilant around pools.

She saw me painting my nails and wanted hers done too. I happily obliged.

Mark and I celebrated our 19th anniversary. The plan was to enjoy Pei Wei after a certain someone went to sleep. That didn't work out so well, so she ended up joining us for our very romantic anniversary dinner :-)

More to come. She has met more aunts and cousins and has enjoyed a trip to the zoo.

Jenna
I love being a Christian, a wife, a mother, and an adoption consultant. I lead a very blessed life.